Ten years ago this summer, I took a trip abroad that was quite life altering and life affirming.  I was finishing up my third decade with an epiphany; I am no longer going to wait for someone else to make my dreams come true.  I realized that I was missing opportunities to follow my bliss, because I was waiting for a companion to come into my life or for a friend to have the funds and vacation time available to join me for adventure.  I decided that year that I would wait no longer.  I booked a trip in February to be taken in August.  I thought about returning to England or Scotland, places I had been before and loved, but realized that I really needed to go to Ireland.  Through an online search I found a few groups that did tours that were geared toward Celtic spirituality.  I was not interested in wasting a single day doing something that did not resonate with me.  I didn’t want to be in this sacred country of my ancestors, and have to spend a day in the Waterford Crystal factory, when I could be spending that time among ancient sites that predate the pyramids.  The company was selected by the travel date that didn’t interfere with a corporate board meeting, and I was set for a solitary adventure.  I had nearly 6 months to plan, and I set about learning more about the sites I would see.  At the time, I knew very little about the country, beyond my love for their native traveling hit, Riverdance.  I was so glad to have the time to know more before landing on sacred ground.  I was given an alumni guide to the history of the island, that went back to the actual land formation around the ice age.  Here’s a little morsel of wisdom:  There were never snakes in Ireland.  They did not cross over the land bridge before the ice melted and turned it into an island.

The difference in being a tourist and a pilgrim is profound.  A tourist travels with a mission that carries a bit of expectation and stress, while a pilgrim is on a spiritual journey with the intention of experiencing wonder and being open to the magick of synchronicity and ‘allowing’.  Rather than scrambling to make things happen, one may simply allow the unfolding of the beauty and mystery that surrounds.

There are so many wonderful and amazing things that I was blessed to experience on that sacred journey, but I woke up this morning thinking of one particular moment that I’d like to share.  I call it my Monica moment.

We were about half-way through our two week tour when we made our way down to the Dingle Peninsula in County Kerry.  It was on the itinerary that we would see, among other things in this beautiful area, the Gallarus Oratory.  In my initial reading, prior to arrival, it was written to be a 12th century church of stone on stone (no mortar) construction that appeared in the shape of an upturned boat.  If you look it up online now, it has a few interpretations for its use by different archaeologists over the years.  One speculation I admire is that it might have been a shelter for foreigners, or another possibility of being a funerary space for the family that owned the property.  I rarely spend much time worrying about the truth of an ancient structure, and tend to simply be grateful that it remains standing for my witness centuries after its construction.

When we arrived at the Oratory, our entire group of 13 entered, and with hands clasped, we could stretch our circle to be touching the walls that encapsulated us.  There was no more than a doorway on one side of the structure and a window on the other.  This was a spiritual tour, therefore, everyone traveling with us had some level of interest in Celtic history, mythology, or were otherwise energetic healers of some sort.  At the time, I was struggling with my identity, and the best I believed I could offer was a passion for singing chants that I had learned over the previous 16 years.  So, I was asked to lead the group in a healing chant, and that I did.  I closed my eyes, and twelve voices joined mine to sing the first chant I had learned, which moved me enough to choose this path of feminine spirituality for my soul’s enrichment.  Raising your voice in an ancient place with fellow pilgrims is a powerful thing.  I can’t tell you how many times we moved through those words, but it was possibly five rounds.  When I opened my eyes, I looked up and found a face in the window looking in at us.  I said, “Oh, look!  We’ve attracted an Angel!”, and I snapped her picture.

I lingered inside the small structure for a few minutes, and when I stepped back into the light, I found my anam cara, a new soul-friend that I met on the tour, talking with the woman from the window.  I heard her say, “You should talk to Melissa, she’s our chantress!”  I walked over and smiled, as the Angel from the window spoke with a foreign accent.  “Hello.  My name is Monica.  I was so moved by your song.”  I replied, “Hi there.  My name is Melissa.  That song really moves me, too.  Would you like me to share it with you?”  And she nodded her head, and she and I clasped each others hands.  We looked into each other’s eyes as I sang: “I am a circle, I am healing you.  You are a circle, you are healing me.  Unite us, be one.  Unite us, be as one.”  As I sang to this sweet stranger whose spiritual path had just crossed over my own, tears poured from her eyes.  When the chant ended, she thanked me and we hugged.  It was quite possibly one of the most powerful moments I have ever experienced.  A decade has passed, and it is still crisp in my mind’s eye, that moment of shared magick.  I am so grateful that I was mindful enough to snap that photo.  Monica still peers through to me from that ancient window whose image is perched in my library.  Sitting at my computer now, I wonder if she ever thinks of me… or if she tells a similar story to her friends and family about this amazingly wonderful thing that happened on her way to the Oratory.

When I reflect on that memory, I wonder why it is we rarely have these magickal moments at home or at the grocery store.  It seems such a shame to have to travel to a foreign land to allow the open heart and open mind to attract such an interaction with people we don’t know.  I think I will set my intention to attract more of this brand of magick wherever I roam, be it ancestral homeland or Trader Joe’s.

If you are blessed with the opportunity to travel beyond your home base, whether it be foreign or domestic, I hope that you will go forth with a pilgrim’s heart.  Be open to receive whatever blessings the Universe has in store for you, and if you ever have the chance, I hope you’ll take the hands of a perfect stranger and sing to her with genuine caring and love.  It will leave a permanent stamp on your soul that will bring you hope and healing even as it becomes a distant memory.  I promise. 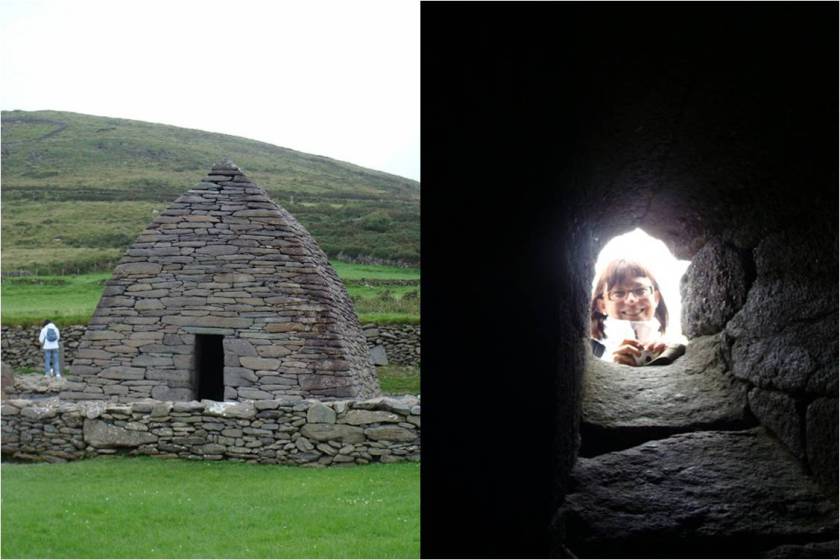 Author of Persephone's Passage: Walking My Father into the Underworld - The Spiritual Journey of an End-of-Life Doula; Joyfully exploring an authentic life as a writer, a healer, and a sacred ceremony facilitator, while caring for aging parents, with reverence and gratitude. View all posts by MelissaBee

2 thoughts on “The Beauty of Pilgrimage”